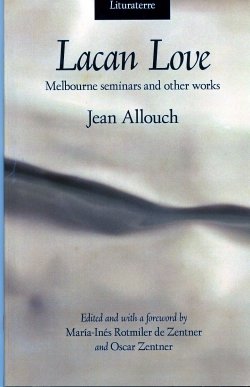 Psychoanalysis has been submerged under a tsunami of different psycho-techniques; from psycho-logy, psycho-coaching and psycho-self-help, to psycho-tropic drugs, and so on and so forth. This, among others, is one of the reasons to consider that the method inaugurated by Freud, and duly subverted by the path followed by Lacan, has neither an assured continuation nor a certain future.

Rather than being either didactic or exhaustive, our intention is to caution the reader. It has become clear that the symptom in psychoanalysis – jouissance and suffering – manifests itself when something does not work, when the imaginary cracks and it cannot any longer hold the realm of common sense; reality. This is something ignored both by the soul-managers and the soma-managers who, a contrario, and aided by some Lacanians, renovate and reinforce common sense, trying to suppress the symptom whilst simultaneously attempting to reject it.The multiple religious promotions of psycho-techniques, born out of it, are the attempts to return to the statu-quo-ante.Lacan used to repeat that life is like a river going from bank to bank, knowing nothing of itself. And it is in this same non-sensical river that the psychoanalyst, like the analysand, is up to his neck. The psychoanalytic method as such does not offer the consolation of religion, philosophy, or a

Weltanschauung. It is for these reasons that a certain degree of reticence, if not scepticism, is not only welcome but also necessary when we are confronted with the Promethean popularity of psychoanalysis. Such recognition, or denigration, even when apparently addressed to psychoanalysis, often shows that the addressees are instead the different and varied aforementioned psycho-versions.

Perhaps it is preferable, and also timely, to inaugurate the fi gure of the transference as the subject supposed not to know rather than the misused and abused aphorism of Lacan concerning the subject-supposed-to-know. This in fact would not be antithetical with the notion of the unconscious as a knowledge that is not known.

For the fi rst time in the English language Lituraterre presents the translation of Jean Allouch’s unparalleled book, Lacan Love, Melbourne seminars and other works. It affords a novel entry to classical and contemporary topics and it discloses new problems that until now have been, in the main, foreclosed by psychoanalysts.